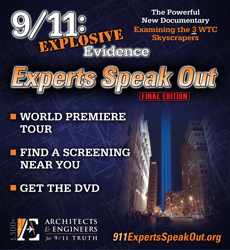 A new 9/11 documentary featuring dozens of experts in architecture, engineering, and other fields has been released and is coming to the Clinton Street Theatre in Portland, OR on Saturday, May 26th at 8:00PM.  Confidently contradicting official US government explanations, these experts argue that the World Trade Center Twin Towers and WTC Building 7 (WTC 7) were not brought down on September 11, 2001, by the fires ignited by the jetliner impacts, but rather by explosive controlled demolition. The 43 architects, engineers, physicists, chemists and others interviewed in the film represent more than 14,000 concerned citizens and 1,700 architects and engineers from around the world who have signed a petition demanding a new, independent investigation. The film details scientific forensic evidence that the group claims was omitted or misrepresented by the official reports. Official reports blame the unprecedented destruction of all three modern skyscrapers on fires and on the removal of insulation by the jetliner impacts. No jetliner crashed into WTC 7.

The documentary will be introduced by David Fura, a local supporter of the group that released the film, Architects & Engineers for 9/11 Truth (AE911Truth). The film is being introduced in 30 cities on a tour of the US by the film’s director/producer, Richard Gage, AIA who also founded and directs the nonprofit organization AE911Truth, based in Berkeley, California.

The 95-minute documentary features cutting-edge forensic evidence from forty-three technical experts, who expose the fraudulence of the NIST (National Institute of Standards and Technology) reports about the destruction of all three WTC high-rises. These include the third-worst structural failure in modern history: the symmetrical free-fall destruction of 47-story World Trade Center Building 7 on the afternoon of 9/11/01.

The startling conclusions brought forth by these experts have profound implications.

Gage declares, “The official story about the attacks of September 11, 2001, falls apart when you look squarely at the facts, omitted in the official reports, and apply fundamental scientific principles to interpret them. After nearly ten years, don’t we all need and deserve to know the truth?”

According to Gage, the film includes interviews with family members of 9/11 victims, who explain why they are still not happy with the answers they’ve been given about what really happened on 9/11: “The family members in this film exhort their fellow citizens to join them in seeing what these experts have to say.”

Several of the film’s experts bear PhD’s, including renowned biologist Lynn Margulis, now deceased. Margulis was a National Medal of Science winner who, along with the other experts in this film, describes unscientific aspects of the US government’s studies of the engineering failures at the World Trade Center. The complete, symmetrical failure of WTC 7 was especially baffling to engineers at the time. According to experts interviewed in the film, the official reports by the Federal Emergency Management Agency (FEMA) and later by the National Institute of Standards and Technology (NIST) assume their own conclusions, exclude relevant evidence, and failed to draw reasonable conclusions from the evidence that was examined. Dr. Margulis for instance discusses how the scientific method should have been applied to the evidence of high-temperature incendiaries found in the WTC dust by an international group of scientists.

Regarding WTC Building 7, materials engineer Kathy McGrade says in the film, “The symmetry is the smoking gun.”

Structural engineer Ron Brookman notes: “The destruction of evidence was a criminal act in itself…. It was already being carted away and destroyed when the FEMA investigators got there about a month after September 11.”

The cross-country tour began in San Diego and Beverly Hills May 21 and 22 and ends in San Francisco in July 2012.

Visit 911ExpertsSpeakOut.org now to view the Trailer and see the Premiere Schedule.


Help Us Transmit This Story